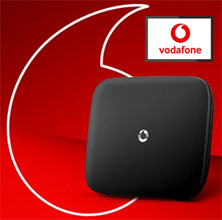 While releasing the fourth quarterly results that ended on 31st March 2019, the UK’s major mobile operator Vodafone also revealed details on its home broadband growth as well as the launch date of its  5G mobile service in the 19 UK cities.

The first phase of 5G commercial roll out is expected to start from 3rd July and the new service will be available in selected cities like Liverpool, London, Glasgow, Manchester,Birmingham, Bristol and Cardiff.

Other cities that would get access to Vodafone 5G include Guildford, Newbury, Portsmouth, Plymouth, Reading, Southampton, Stoke-on-Trent, Warrington, Birkenhead, Blackpool, Bournemouth and Wolverhampton.

As for the 5G mobile service launch, Vodafone is the first operator to offer the service in 19 cities across the UK after testing 5G over its full fibre fixed and mobile network.

With 4G services in the UK currently offering 90Mbps speeds to mobile users, 5G is set to offer the fastest mobile speeds using the new technology.

The quarterly report also showed that Vodafone home broadband customers increased by 46k in the last quarter to reach a total base of 575k, which is expected to reach 5m by 2025, thanks to its on-going full fibre (fibre to the premises) roll outs across the UK.

Today’s statement from Vodafone also revealed that it will soon launch 5G compatible smartphones which will be available to customers by the month end. According to the operator, the pricing of 5G handsets will cost the same as 4G mobile phones.

Along with 5G handsets, Vodafone will also launch a new router which can provide ultra fast connection to multiple users by connecting to 5G and Wifi. This device is more likely to replace fixed fibre broadband in homes and businesses as a convenient option.