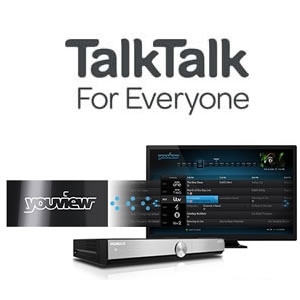 What do you get with TalkTalk broadband and TV packages?

TalkTalk Fibre 65 broadband offers an average download speed of 67Mbps speed which is great for streaming 4K content on a big screen.

You can include TalkTalk TV and Fibre 35 broadband in a bundle.

TalkTalk Fibre 35 offers decent speeds (38Mbps) and allows you to stream live TV and videos on one or two devices. For 4K streaming, it is better to upgrade it to Fibre 65 or Fibre 150.

TalkTalk TV set-top box is basically a YouView box which comes with basic features like pause and live TV shows. It is packed with popular streaming apps –  Netflix, Now and Amazon Prime Video.

You need aerial to be connected to the box to watch freeview channels.

TalkTalk TV comes with RJ45 Ethernet connection and you can connect broadband to it to stream the videos. It also comes with a HDMI connection.

However, TalkTalk TV box can not record live TV shows which is the biggest disadvantage with it.t

For multi-room TV, you can get additional TV box which would cost extra.

TalkTalk TV comes with a basic set of TV channels which include 80+ free view channels, 15 HD channels and 30 radio stations.

However, you can add premium channels Sky Cinema and Sky Sports by subscribing to Now TV membership.

You can also buy Netflix and Amazon Prime Video subscriptions to watch your favourite movies and TV contents.

All the add-ons come with flexible, one month contract so you can can cancel them at any time and change them every month..

TalkTalk TV and broadband packages include these free apps which you can use for making cheaper landline calls or watching TV on your mobile devices like tablet or smartphone, when you are on the move.

TalkTalk broadband includes HomeSafe which helps you block the specific websites while the advanced, Supersafe feature protects all your devices from viruses and malware.