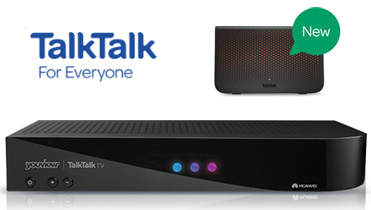 While most of TalkTalk broadband packages are line only, you can add TV, calls or upgrade to fibre with flexible add-ons which are known as boosts.

TalkTalk also offers exclusive TV deals to its broadband customers and has become a leading triple-play bundle provider in the UK market that was earlier dominated by BT, Virgin Media and Sky.

TalkTalk offers a basic broadband option to users who look out for a simple plan with decent speeds and unlimited internet usage at budget price.

Fast broadband which offers an average download speed of 11Mbps is perfect for households with one or two users and for simple online activities like surfing and online shopping.

Faster Fibre is ideal for households with 4-5 users and for downloads and streaming TV shows in HD and playing online games.

Superfast Fibre offers faster speeds that would perfectly manage large houses with up to 10 users.

Fibre packages also include  the new WiFi Hub which can connect up to 50 users to WiFi at the same time without reducing speeds.

TalkTalk offers pay as you go calls as standard with line only broadband. This means you  pay only for the calls that you make.

However, you can add unlimited UK calls and mobile calls or international call plans at anytime. They are available separately as flexible boosts so you can cancel them at anytime with one month notice. 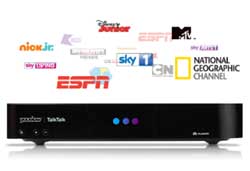 TalkTalk TV is the cheapest triple-play bundle for UK homes that actually pay more for such packages when taken from Sky, BT or Virgin Media.

TalkTalk TV was launched much later than its rivals, however, the service has become quite popular, thanks to the huge take up in the last two years and good customer satisfaction levels reported by the industry regulator Ofcom.

YouView also allows you to access catch up TV and on-demand players like iPlayer, ITV Player & All4.

With its two TV packages which offers limited TV channels, you can also watch premium channels like Sky Sports, BT Sport and Sky Cinema  by adding TV boosts that would cost extra.

TalkTalk offers two TV packs – TalkTalk TV and Plus TV. Their cost does vary, depending on whether it includes standard or fibre broadband.

With Plus TV, you get  YouView+  TV box which comes with an additional record feature which can record up to 185 hours of TV using its 300GB storage.

Fibre broadband upgrade
TalkTalk TV packages come with 11Mb Fast broadband as standard, however, you can take up Faster fibre (38Mb) or 67Mb Superfast Fibre at any time, by adding the boost.

Switching from your current provider to TalkTalk is fairly easy. Just sign up with TalkTalk and no need to get MAC or contact your ISP. You would be probably switched to TalkTalk broadband in a couple of weeks, with no downtime.

If you are on Virgin Media cable broadband, you would need to cancel it, but, make sure that you would undergo minimum downtime.