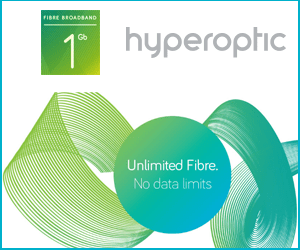 What is Hyperoptic broadband?

Hyperoptic is a city-based full fibre broadband provider which offers gigabit speeds to homes and businesses in more than forty cities and towns across the UK, using its own FTTP (fibre to the premises) network which covers 500K UK homes.

Hyperoptic broadband packages come with competitive pricing, when compared to the ultrafast broadband plans offerd by Virgin Media and BT.

Other services that Hyperoptic offers include business broadband and business leased line.

Hyperoptic offers both broadband only and broadband & phone packages. Hyperoptic phone service works using the internet connection so the usual phone socket is not needed. If you do not need home phone, you can choose from broadband only plans which are cheaper than phone & broadband bundles.

You can choose from different speeds available from the provider with 24 month, 12 month or 1 month rolling contract option. Free activation applies to selected packages when taken with 24 months or 12 months contract.

When you phone to broadband, the package will cost £2 extra a month.

With this ultra fast connection speeds, you can download or upload a video of 1GB size in less than 10 seconds.

You can download or upload 1GB video in less than a minute at 500Mb speeds.

You can download or upload 1GB video in less than 2 minutes at 150Mb speeds.

It is not superfast, but is still fast enough to download or upload a video of 1GB in less than 4 minutes.

Ideal for browsing, watching videos and other general internet stuff.

Hyperoptic offers pure fibre broadband which comes with symmetrical download and upload speeds. This means you get the same speeds in both directions – downstream and upstream. However, the lowest priced Fast plan (50Mbps) offers an average upload speed of just 5Mbps.

By comparison, FTTC (fibre to the cabinet) based broadband services (BT, TalkTalk and Sky) and Virgin Media cable broadband come with much slower upload speeds in relation to the download speeds.

How fast is Hyperoptic broadband in comparison to other providers?

Hyperdual is a dual band WiFi router with 4 Gigabit connections. It comes with automatic band steering?which helps the connected devices get reliable and faster speeds. The channel optimisation feature automatically fixes the issue of wifi interference.

Hyperhub features VoIP support so you can make calls using the internet connection.

Hyperoptic broadband is totally unlimited and there are no monthly data caps.

Similarly, there is no traffic management which means your connection speeds are always reliable and faster all the time. No slow down even at peak times.

All broadband & phone packages include pay as you go calls.

Landline is not required. You can make calls using broadband connection.

Hyperoptic network is 100% fibre and it is built with optical fibre right from the exchange up to your premise.

This type of pure fibre broadband to the home or premises (FTTH or FTTP) ensures speeds do not drop over the distance.

You can expect to get connection speeds very much closer to the advertised speeds.

All deals come with 24 month,12 month and 1 month rolling contracts.

Is Hyperoptic available in my area?

Hyperoptic broadband is available in selected areas, even in big cities. It is currently available in 43 cities in the UK including London, Glasgow, New Castle, Leeds, Liverpool, Manchester, Sheffield, Nottingham, Cardiff, Birmingham, Reading and Bristol.

You can use our broadband postcode checker to find out whether you can get Hyperoptic broadband in your area.

Before installing its network, Hyperoptic first checks whether the area it is about to connect, has enough demand and is viable for its investments.

Once enough people in a locality register their interest online, Hyperoptic starts to connect each building to its network with fibre cabling.

Is Hyperoptic broadband any good?

Hyperoptic broadband is ideal for bandwidth intensive activities that require faster upload speeds which Openreach based providers and Virgin Media do not offer as their technology uses copper cable or co-axial cable to connect homes with cabinets while Hyperoptic offers pure fibre solution to homes to get symmetric speeds.

That said, Hyperoptic broadband plans in the faster tiers are great for quicker uploads of large size files and online gaming.

However, Hyperoptic broadband is not widely available like BT or Virgin Media. Its FTTP network is mainly available to office blocks and large residential buildings in major cities and towns.

Does Hyperoptic use Openreach network?

Hyperoptic uses its own network to reach 500k premises across the UK. Its FTTP network does not use copper cable and street cabinets like Openreach. The fibre cable is directly taken from exchange to the premises to ensure faster speeds than Openreach based FTTC broadband.

How to setup Hyperoptic broadband?

Hyperoptic broadband setup requires engineer assisted installation in your home.  Fibre optic cable will reach your home and get connected to the Hyperoptic socket or internal fibre converter on the wall and then to the Hyperhub router. The initial router setup will be done by the engineer.

Can I get Hyperoptic broadband without phone line?

Hyperoptic offers phone service without using the traditional landline network. Its VoIP service uses broadband connection  to make calls. However, this feature is not enabled when you choose a broadband only plan.