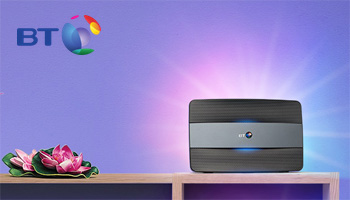 BT is neither the best nor the cheapest broadband provider, despite its larger than life size. Without any doubt, BT broadband packages lack speeds, when compared to Virgin Media.

Likewise, BT TV is nowhere around when compared to Sky TV or Virgin Media TV. Its landline service is also average, when compared to its rivals.Even then, BT still remains a very popular ISP for millions of households in the UK. What makes BT a reliable broadband provider?

Reasons you can choose BT as your provider

BT offers both standard or fibre optic broadband which allows you to choose from  different download speeds -10Mbps or  50Mbps or 67Mbps. These are average user speed and at least 50% of customers can access these speeds at peak time (8pm to 10pm).

All BT broadband come with truly unlimited usage means there are no hidden caps on data usage as well as no slow down during peak times.

All packages are bundled with free, unlimited, weekend calls to UK landlines.

BT Cloud  Storage
This allows you to back up  up to 1000GB data, while you get 200GB free cloud storage with your package.

With faster speeds and launch of new fibre packages, BT has become one of the fastest broadband providers in 2019, beating its rivals Sky and TalkTalk, but still far behind Virgin Media.

However, customer satisfaction ratings for BT broadband were not as good as Plusnet, Sky or Virgin Media, according to Ofcom customer satisfaction report released in April 2019. The survey found 80% of BT broadband customers were satisfied. By contrast, EE  had the highest percentage of satisfied customers (87%), followed by Plusnet, Virgin Media and Sky .

BT phone is included when you take bundled broadband service from BT. You get unlimited weekend UK landline calls at no extra cost, though, you can add anytime calls or anytime calls for an extra fee.BT also offers stand-alone landline service with options to subscribe for a suitable call plan.

Here is an overview of BT home phone plans:

BT Line Rental Saver allows you to make some savings, when you pay in advance for 12 months.

If you want BT TV with your broadband, choose a suitable TV bundle which includes any one of these packs – TV Starter, TV Essential, TV Entertainment or TV Max.

YouView box worth £99 is bundled with BT TV Starter and  BT TV Essential at no extra cost, while the advanced YouView+ box worth £199 comes free with TV Entertainment bundles.

BT Sport is added to your TV bundle by default, or you will need to add it for extra subscription.

The BT Sport App is available for mobile internet & WiFi users who can watch the live sports events on their iPhone, iPad, Android or Windows Mobile devices while on the go.

Freeview channels also include some HD channels and the Bolt-ons allow you to add on demand, Kids Extra, Sky Cinema and HD Extra channels by choosing the respective bolt-on.

The popular Netflix movie service can be added to your TV pack with an extra fee.

BT Mobile SIM Only plans offer you superfast, 4G speeds and various monthly data usage plans so you can pick the right option to meet your needs.

Unlimited texts are included on all plans, however, call minutes which vary between 200 minutes and unlimited minutes, depending on the deal.

BT Broadband Review : What we think about BT

With improving performance and widely available superfast, fibre packages, BT broadband is a great choice for the UK homes which look for reliable broadband or a TV and broadband bundles.

BT broadband may not be a cheap option, but, you can get great value for money with their free extras, promotional discounts, reward cards and free gifts which BT often offers to the new customers.

Furthermore, you would save money when you go for bundled packages or add BT TV to broadband.

We use cookies to ensure that we give you the best experience on our website. If you continue to use this site we will assume that you are happy with it.OkPrivacy policy