Connectivity is more reliable as it uses next generation, optical fibre cable to reduce the loss of speed over long distances.

Great choice for households where multiple users and devices need to be connected.

With superfast speeds, you can download and upload files, music albums and videos in no time.

All major providers offer fibre broadband packages. There are some providers such as Hyperotpic and Gigaclear whose services are limited to selected areas.

The cable operator offers the fastest speed of 516Mbps to households, while mid-range packages offer speeds between 54Mbps and 213Mbps.

Sky is more focussed on its TV service, while offering a single fibre package (Broadband Superfast) with average download speed of 63Mbps.

Known as an affordable fibre provider, TalkTalk offers 38Mb and 67Mb speeds to its fibre customers.

You can either choose 36Mb or 66Mb speed when you decide to go with Plusnet.

EE allows you to get 36Mb or 67Mb speeds, while choosing its fibre broadband.

Vodafone offers much cheaper fibre broadband deals than its rivals. There are two fibre options – 35Mb or 63Mb. Vodafone is one of the operators which offers minimum guaranteed speed on their deals.

SSE fibre comes with a range of speeds – 35Mbps and 63Mbps.Free connection and exclusive discounts for its gas & energy customers.

Fibre optic broadband uses optical fibre cables made of glass or plastic which is better medium than traditional copper wires for quicker transmission of data from exchanges to premises or vice versa. Via fibre networks, speed is not lost as much as through copper cables over long distances. This improves speed and coverage of fibre broadband.Buried underground, optical fibre network is also easy to extend and install anywhere in urban or non-urban areas.In the UK, fibre broadband is available as three types:

FTTC (fibre to the cabinet)

FTTC broadband uses fibre optic cables between exchanges and street cabinets from where the connections come to homes via copper wires. You can get maximum download speed of 80Mbps and upload speed of 20Mbps over FTTC lines. Most providers including BT, Sky, TalkTalk, EE, Plusnet and Post Office currently offer their fibre services via FTTC network.

FTTH or FTTP (fibre to the homes/premises)

This is also known as pure fibre broadband as it uses optical fibre cabling for the entire installation of the line, right from the exchange up to the users’ premises.This network improves speeds and offers up to 900Mbps speeds, but available in selected areas.

Virgin cable broadband uses DOCSIS 3.0 coaxial cable between the cabinet and homes, rather than copper which Openreach makes use of. DOCSIS 3.0 allows Virgin Media to deliver the fastest speeds to UK homes, beating the speeds delivered by BT offers over its FTTC network.

Fibre broadband speeds do vary depending on the network (FTTC or FTTP) that delivers. Faster the speeds, more limited its availability.

Superfast fibre connections offer speeds in a range of 30Mbps – 100Mbps. Most fibre packages are in this group.

Hyperfast fibre broadband which offers speeds around 1Gbps is limited to some areas in major cities. These speeds are ideal for large businesses or homes with a plenty of users.

You should also bear in mind that fibre broadband speeds do change with respect to usage time (normal hours or peak times of 8pm-10pm). Factors like network congestion and traffic shaping can cause this.

Here is the comparison of advertised speeds and actual speed reported by Ofcom survey 2018:

Almost all households in the UK (98%) can now get fibre optic broadband. It is more easily available in cities and towns than villages.Fibre broadband offers different speeds which does vary depending on provider and package.   To check the availability of which providers offer fibre packages in your area, use our postcode checker which also helps you compare prices and their latest offers.

Virgin Media covers 60% of the households in the UK while Openreach based providers like BT, TalkTalk, Sky and EE have better connectivity of up to 98%.

There is also provision of fibre broadband by operators like Hyperoptic which is limited to some major cities. 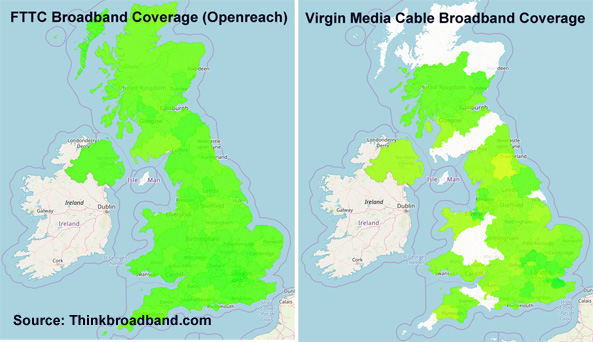